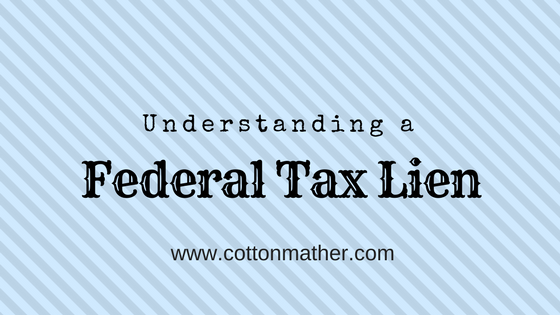 When a taxpayer does not pay a tax debt in a timely fashion, the government may file a legal claim called a tax lien against the taxpayer’s property.  A tax lien is the government's claim on your property and is generally placed when a taxpayer, such as a business or individual, fails to pay taxes owed. This does not mean that taxation authorities will seize your property, it just ensures that they get first right to your property over other creditors. The tax lien is created in a series of steps.  First, the Internal Revenue Service (IRS) assesses the taxpayer’s liability and records it in their records.  Next, the IRS sends an invoice called a “Notice and Demand for Payment” to the taxpayer explaining how much is owed.  Finally, if the taxpayer does not fully pay the debt on time, the lien is created and the IRS files a publicly-viewable document called a “Notice of Federal Tax Lien” to inform potential creditors of the taxpayer that the government now has a legal right to the aforementioned property and assets.

The filing of a lien by the IRS may be avoided with proper diligence by the taxpayer.  Aside from the obvious payment of the debt in a timely fashion, there are payment options open to taxpayers to satisfy the debt over time, such as installment plans.

A tax lien is often confused with a levy; however these are not legally the same, but are actually different steps in the process.  The lien’s legal effect is to secure the government’s interest in taxpayer property.  The levy is when the government acts on the lien.  If the taxpayer does not satisfy the lien or make satisfactory arrangements with the government to settle the debt, the government, through the IRS, may levy the taxpayer’s real estate, personal property, and other assets, either fully or partially owned by the taxpayer.

Once the lien is filed, there are several ways to resolve the lien.  The best way is to pay the tax debt in full.  However, there are other ways to resolve the lien allowable in certain situations to benefit both the taxpayer and government.  A lien may be considered discharged from the taxpayer’s property depending on factors such as the value of the property, type of property, or sales agreements for the property at the government’s discretion.  Creditors may be able to “move ahead” of the government in priority of taxpayer debt in a process called subordination, which does not resolve the lien but may improve the possibility of a taxpayer successfully applying for a loan or mortgage.   The Notice of Federal Tax lien may undergo a withdrawal by the IRS, wherein the IRS does not compete with other creditors for the taxpayer’s property but the taxpayer still remains liable for the debt.  Two methods of obtaining a withdrawal include satisfying the required tax liability and remaining in compliance with all tax filings for the three years prior to the withdrawal and remaining current in estimated tax payments; and when a taxpayer converts an installment agreement into a direct debit installment agreement with the government.  In the latter case, the taxpayer must, among other government-specific requirement, owe $25,000 or less, pay the amount in full of the earlier of 60 months or before the applicable Collection Statute expires, remains in compliance with filing requirements, and has not defaulted on any payment agreements, past or present.

Even when a tax lien is filed, all is not lost.  Taxpayers can call government offices such as Centralized Lien Operation, local Collection Advisory Groups, the Office of Appeals, or even contact the IRS directly.

IRS issues 2019 to 2020 Per-Diem Travel Rates
Taxpayer Bill of Rights- Protections for All Taxpayers
What Are the Tax Implications of Lending to Family Members?
How the IRS Decides Which Tax Returns to Audit
New Proposed W-4 design for 2020
Tips for Minimizing Taxes on Severance Pay
Can You Use Your IRA to Buy a House?
What’s the Difference Between a 401(k) vs. Roth IRA
New Updates for Business Meal Deductions
New IRS Tax Withholding Estimator for the Self-Employed
Tweets by @CottonMatherCPA
↑